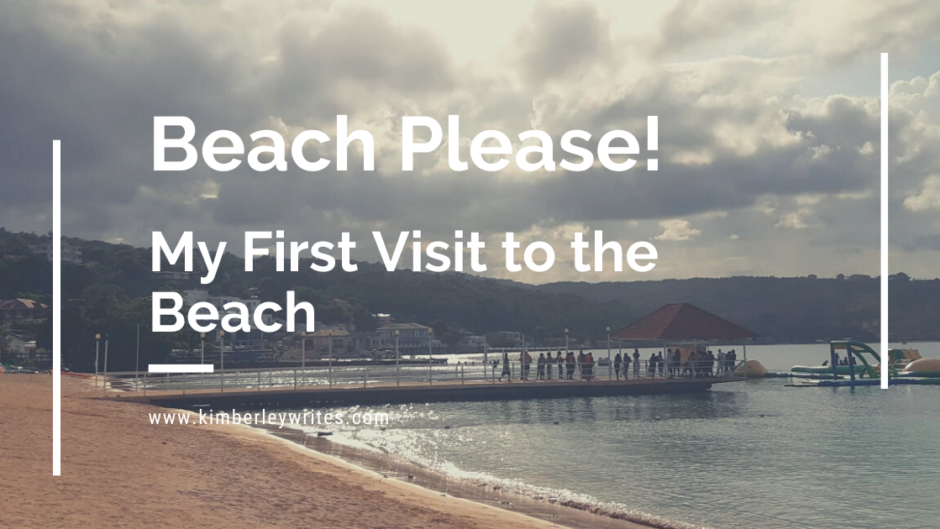 It is no secret that some of my favourite memories of growing up took place while at my grandma’s house. We’re already a month into summer and I thought it was a great time to share a summer memory. For as long as I can remember I’ve always loved the beach. This was before I ever even went to the beach. Based on what I saw on TV I could tell the beach would be one of my favourite places. Turns out I was right. There’s just something about the powdery sand beneath my toes and the cool azure waters lapping against the shore. Trust me when I say Jamaica is not short of beautiful, white-sand beaches. In today’s post, I will be sharing the story of my first visit to the beach.

“Advice from the Ocean: Be shore of yourself. Come out of your shell. Take time to coast. Avoid pier pressure. Sea life’s beauty. Don’t get so tide down on work that you miss out on life’s beautiful waves.” – Unknown 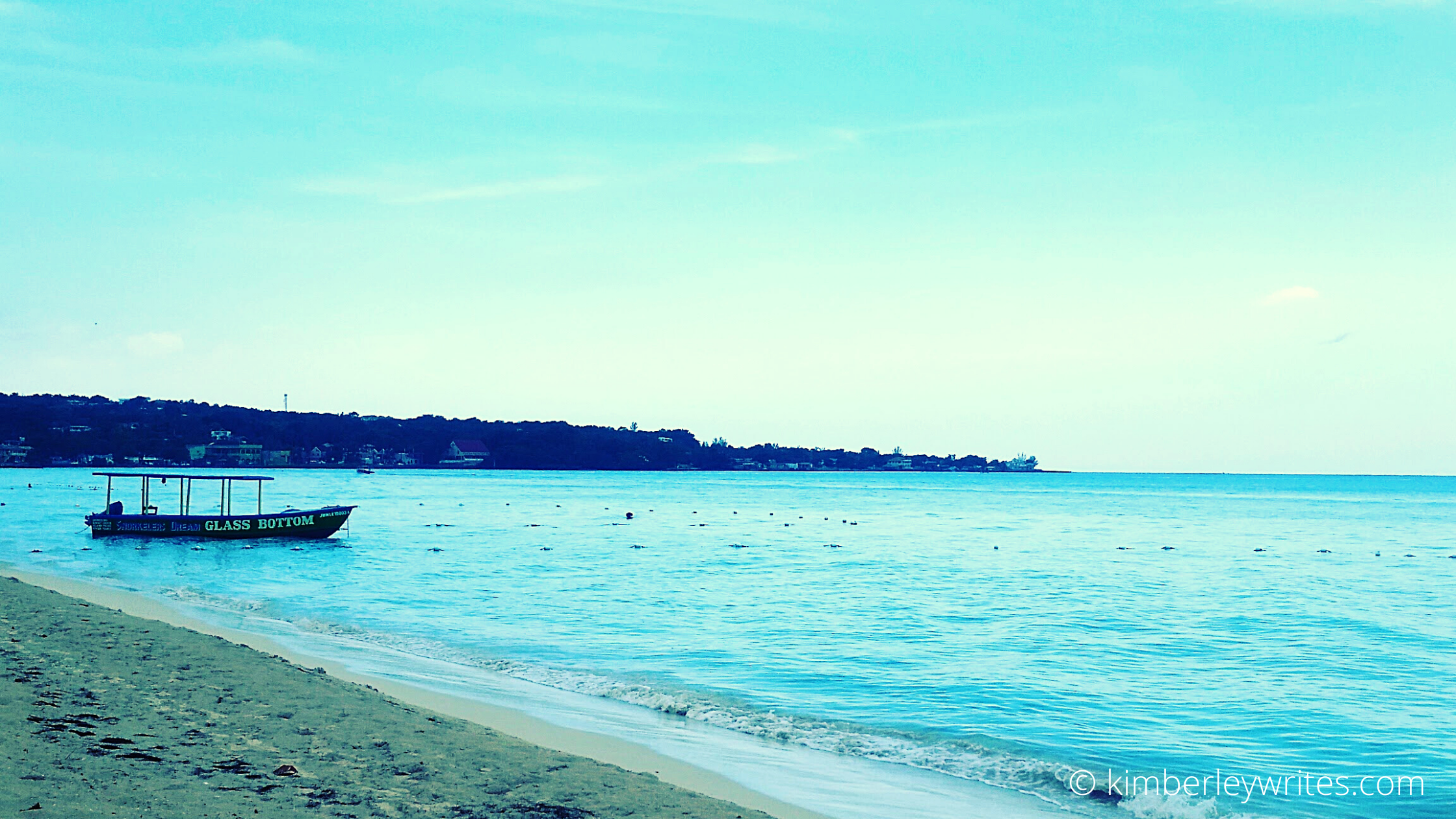 Summertime in the Country

Last Christmas I wrote a post about my favourite Christmas memory. In that post, I mentioned that it was common for us (my siblings and I) as kids to spend the summer holidays at grandma’s house in St. Ann. If you haven’t read that post yet feel free to read it here. Summers spent in St. Ann were delightful times. I vividly remember waking up to a crisp morning air. This often forced us to put on a sweater which we then discarded once the sun was high enough. We could also look forward to having a cup of freshly scalded milk with or after breakfast. My uncle had several cows and he would take fresh milk to the house after going to ‘cow bush’.

A few of my cousins lived close, so we had company to ramp (play) with. We would ramp from morning until Grandma called us to go take dirt off our skins. This was her way of telling us to go have a bath. The ramping, of course, took place after the morning chores. Grandma like most Jamaican or dare I say Caribbean grandmothers were strict on kids where chores were concerned. They spoilt us, but no amount of spoiling could save you from doing your daily chores. 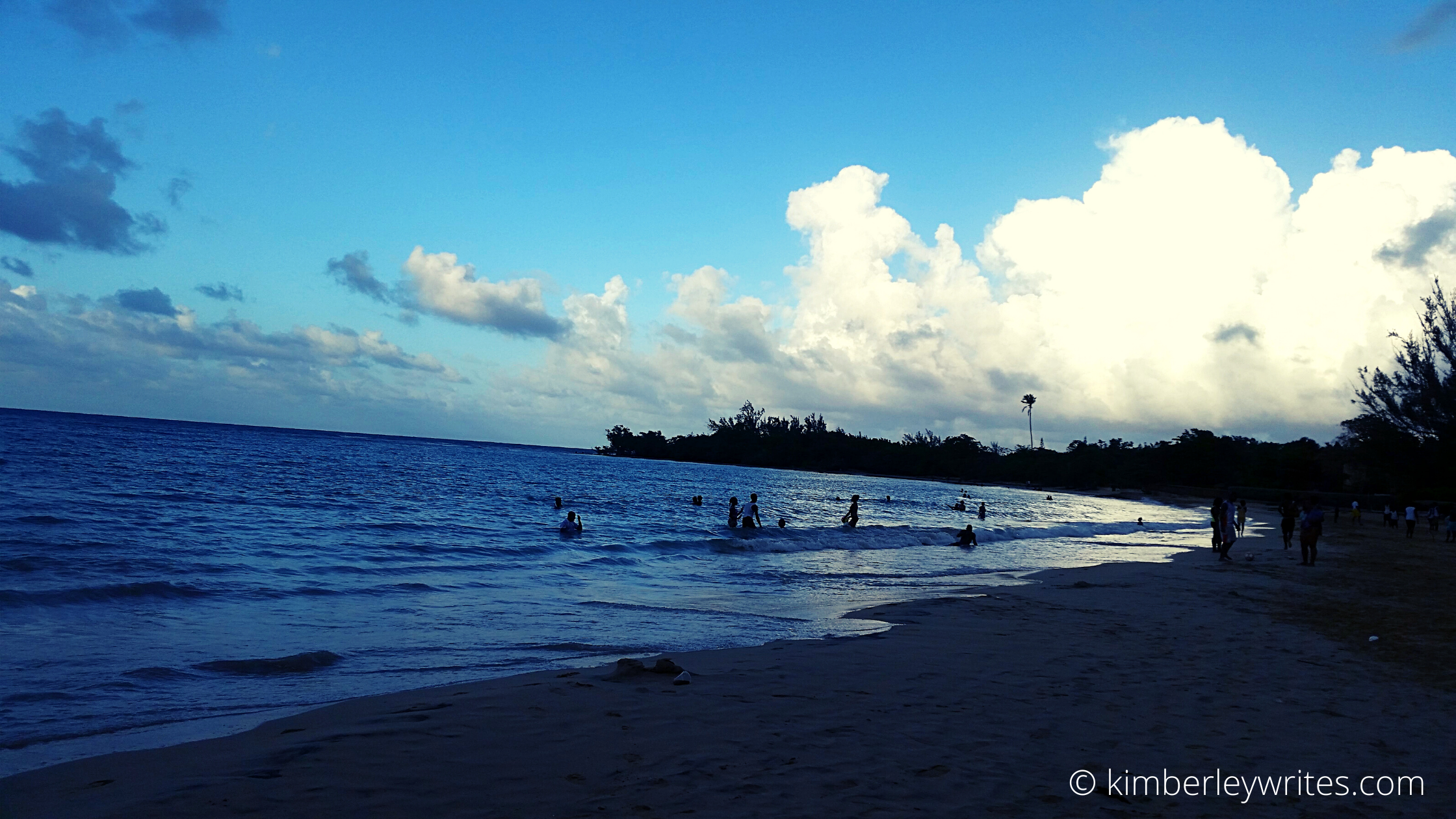 St. Ann has some beautiful beaches and residing in St. Ann meant my cousins visited the beach on numerous occasions. They would excitedly describe the experience and tell us how many seashells they found. My sister and I would listen intently with maybe just a tiny hint of jealousy. This particular year we arrived for holiday a few days after their visit to the beach. We were disappointed with this news, but we relished the stories regardless. A few days after our arrival we got up, had breakfast, and did our chores as usual. While we were lazing around my aunt stopped by and told us she was taking us to the beach. Ecstatic doesn’t even begin to describe how we felt that day. My sister and I were over the moon.

We quickly got ready, forgetting one important detail. Neither of us had bathing suits. It took a while to figure out what we would wear in the water. After much deliberation, it was decided that a t-shirt and tights (biker shorts) would work perfectly. This was much to my delight as my grandmother was ready to loan me a pair of Spanx to swim in. I didn’t know what they were at the time, but I also didn’t want to say no to Grandma. Luckily, my aunt disagreed

. Once we were packed and ready, we were off. 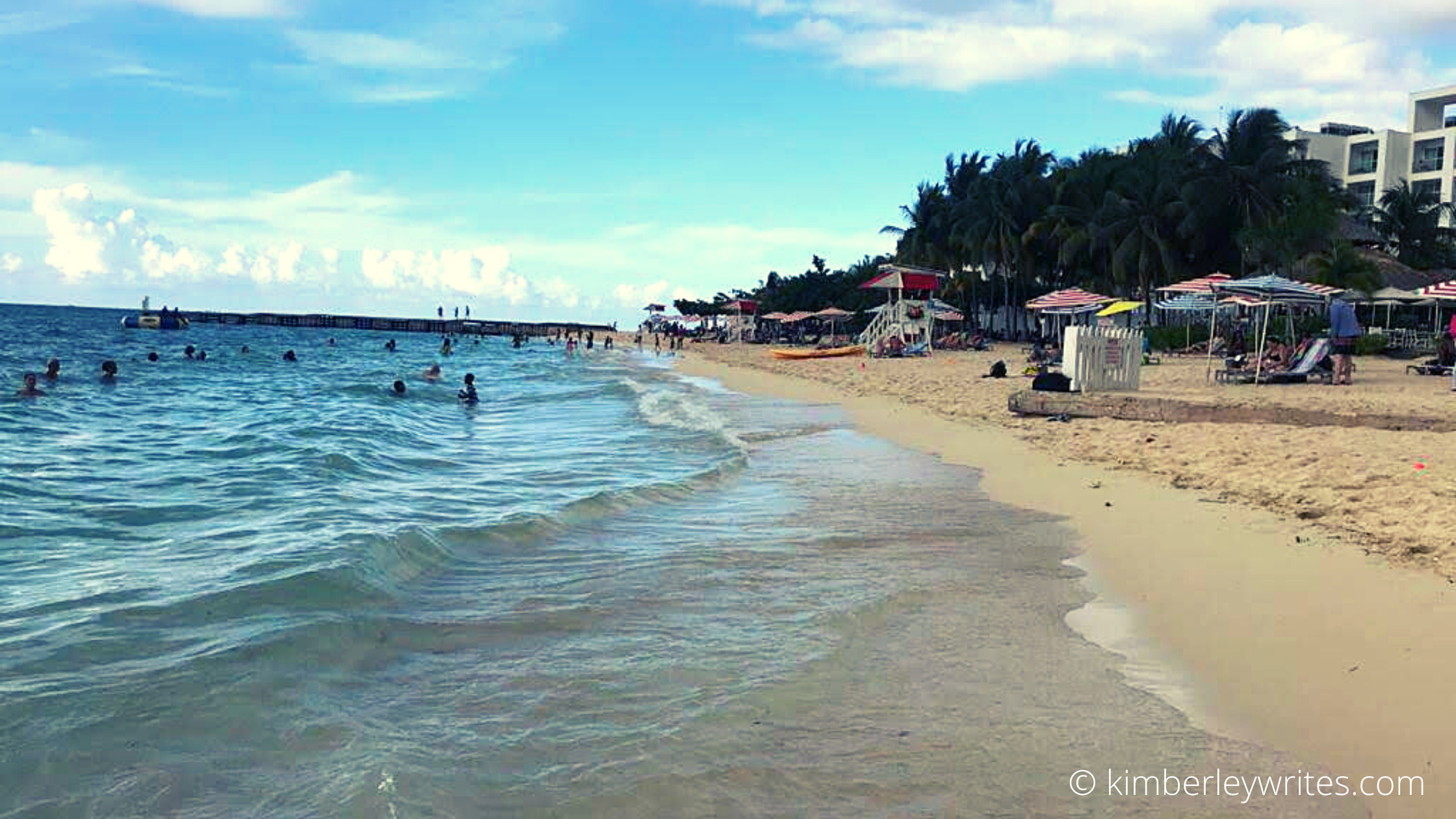 We went to Puerto Seco Beach in Discovery Bay. I don’t remember the length of the journey, however, it was two bus rides away. It wasn’t long before we got a bus from Grandma’s gate. From there we went to Brown’s Town in order to get a bus to Discovery Bay. We stopped in Brown’s Town and got patties and juices for the journey. No food was allowed on the beach and so we had our lunch on the way. I’ve always enjoyed road trips and this one was special because it was our first trip to the beach. At a particular point, we could see the sea while on the bus and this made us very excited. I was mesmerized by how blue the water appeared, it was even more beautiful than I could imagine. The depiction of the sea on-screen paled in comparison to what my eyes beheld.

We arrived at the beach still buzzing from the picturesque views on the way. The beach up close did not disappoint. Looking out on the horizon we saw nothing but blue. I could barely tell where the sky ended and the sea began. The water seemed more turquoise closer to the shore and farther out it reflected a deeper, almost cobalt blue. We were excited to take a dip. Our aunt paid the entrance fee and we immediately got changed. The sand felt soft and warm beneath my feet as we searched for a spot to put our things. We found a good spot beside some tourists. The beach was bustling with people but it wasn’t crowded.

The time came for us to go into the water. My sister and I stood at the edge and allowed the waves to greet our toes. We then waded a little further holding our aunt’s hand. She made sure we stayed close to the shore. The sea was calm, and the waves were gentle. Since we were close to the shore we bounced with each wave. Our aunt tried teaching us how to float. This proved difficult because we were too afraid to relax with the water constantly covering our heads. It took us years to finally learn how to float. I think it happened in 2016. We spent the rest of the day jumping over the waves, playing in the sand, and watching people dive from a nearby pier. There were some swings close to the bar area and I think we also played on those for a while. 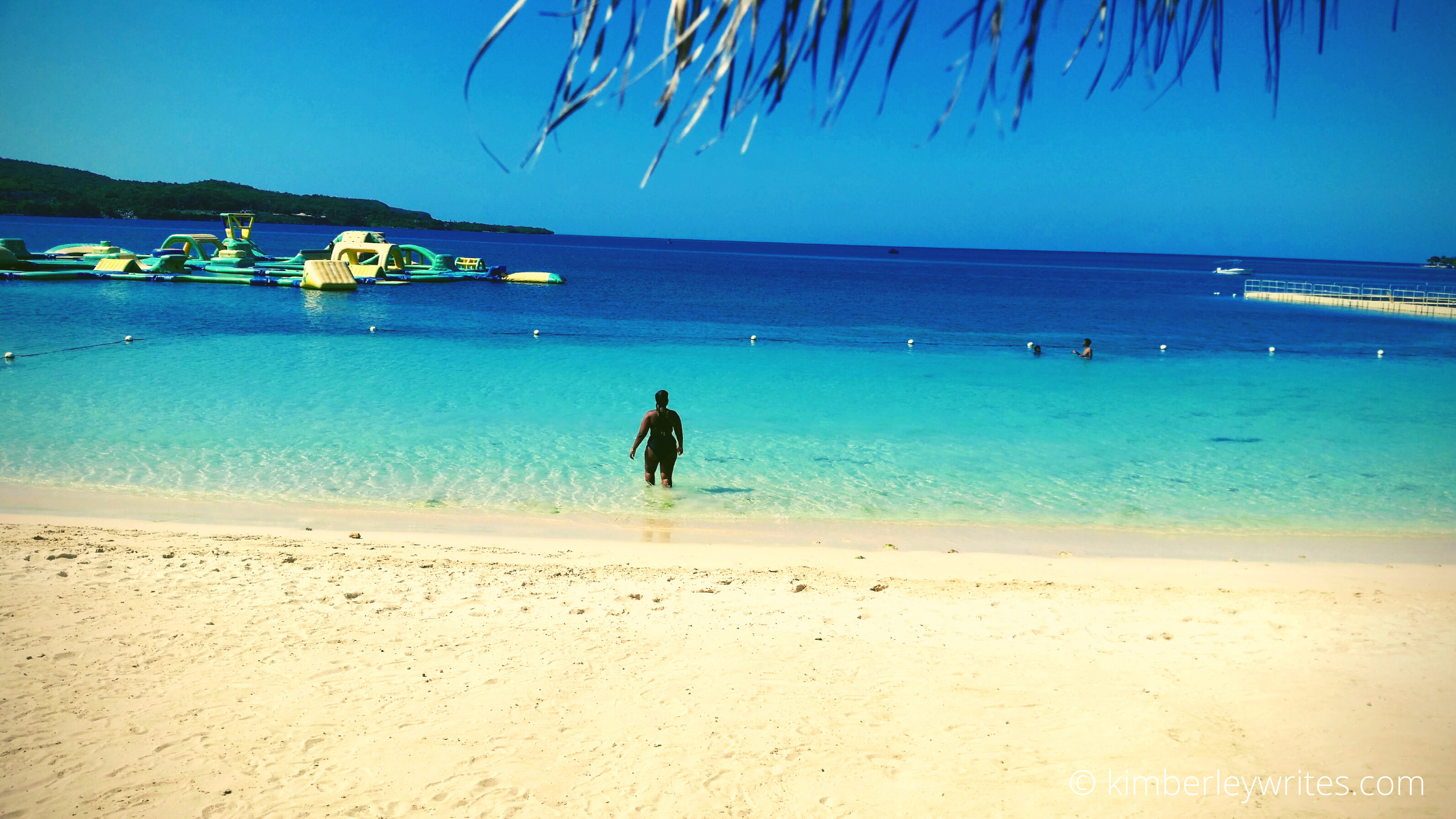 After a day well spent, we headed home tired and delirious. We may have slept on the bus on the way home. When we got back to grandma’s house, we couldn’t contain ourselves. They wanted the details and we told them everything. My sis and I were grateful our aunt took us to the beach. Suffice to say that was the best summer we ever had at that time. We went to bed happy and I could actually feel the waves pulling me as I drifted off to sleep. About a week or two later we got to share our experience with our parents. Every summer spent in St. Ann after that we got to visit the beach. By then our younger brothers could also join the fun. The Puerto Seco Beach was recently refurbished and looks nothing like it did when I visited the first time. It remains one of my favourite beaches. You can read more about it here.

Do you remember your first visit to the beach? Tell me about it in the comments. 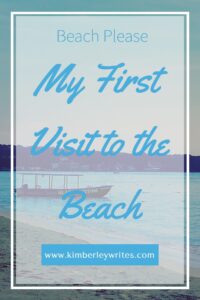 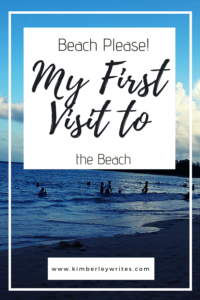