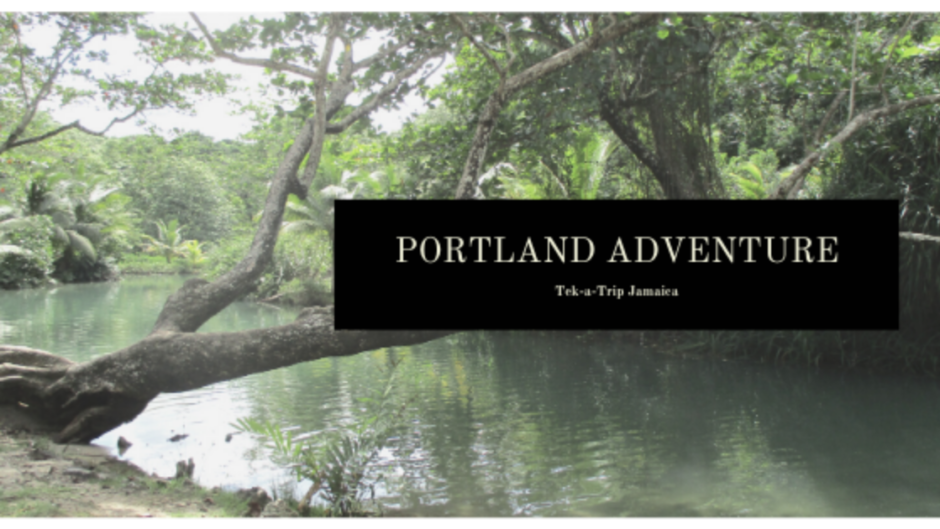 A few weeks ago, a friend of mine invited me on an adventure with Tek-a-Trip Jamaica. I was unsure at first as I had other plans for the day of the trip, however, I thought about it and decided to go. I did not regret that decision as it was an amazing experience. The adventure took us to Portland, a beautiful parish in Jamaica. I had a really great time so of course, I'm going to tell you about it.

Tek-a-Trip Jamaica is a travel company that began with a group of friends who explored Jamaica together and decided to plan trips and invite persons to take the adventure with them. If you've always wanted to go on more trips but couldn't get around to planning them, Tek-a-Trip Jamaica takes this hassle away. The only thing required of you is to pay to cover the cost and have a great time. So far, the team hosts one trip per month. This takes place in the last week which works out well since in Jamaica we usually get paid at the end of the month. Sometimes you have to register early as seats go really fast. 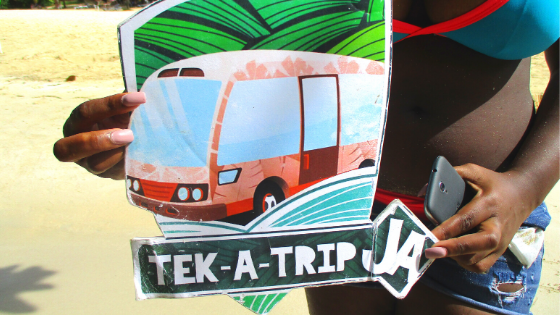 The trip was to the parish of Portland. We were scheduled to visit three locations Frenchman's Cove, Blue Lagoon and Monkey Island. I was super excited as I've always wanted to visit Frenchman's Cove. The other two were just brawta (bonuses). Portland is deemed to be the most beautiful parish in Jamaica by several Jamaican bloggers and vloggers. I agree that it is a beautiful parish, however, I don't think I've seen enough of Portland to fully support that claim. For now, I'll take their word for it. 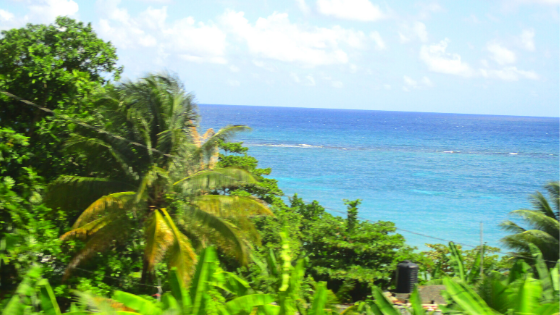 Portland is located on the northeast coast of Jamaica. It is known for its pristine beaches such as Frenchman's Cove, Winnifred Beach and Boston Beach. There are fourteen caves in Portland, the most popular one dubbed 'The Rabbit Hole' which is located at Reach Falls. Portland is the home of the Boston Jerk Centre which I believe needs no introduction. All I'm saying is if you know Jamaica, you know Jerk. Over the years Portland has often made it to the big screen as several popular movies and films have been shot in the parish. These include Tom Cruise's 'Cocktail' and 'Knight and Day' with Cameron Diaz as well as Robin Williams' and Jimmy Cliff's 'Club Paradise' just to name of few. Chances are, if you go somewhere in Portland it's quite likely that someone famous has also been there. I find that interesting considering how small our island is.

Fun fact: Scenes from the movie 'Knight and Day' were shot at Monkey Island and Frenchman's Cove, two of the locations we visited. 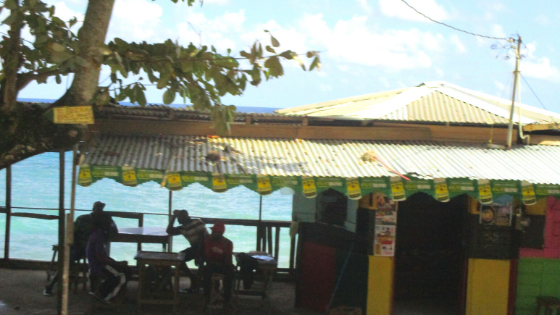 The week of the trip arrived rather quickly. During the week there was a weather report that there was a trough moving over the island. This meant that in the days ahead it was possible that there would be rain. And there was rain. I was worried that the rain would cause the trip to get postponed or worse, cancelled. I checked the weather in my area and then checked it in Portland to see how accurate it was. Fortunately, there was no rain forecasted for the day of the trip so that eased my worry just a bit. In the days ahead I kept checking and re-checking just to be certain. On the day of the trip, we were blessed with clear skies and beautiful sunshine. 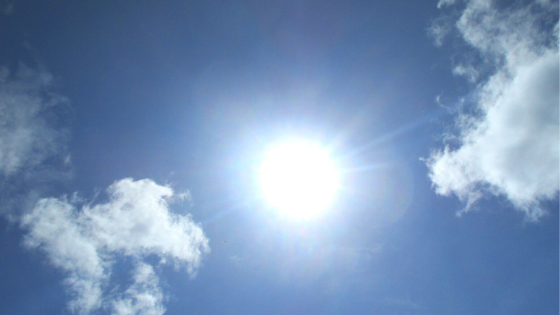 I appreciated the fact that the Tek-a-Trip Jamaica team provided a FAQ sheet which detailed all the relevant information and addressed any concerns I may have had such as the payment details and pick-up location and time etc.  We (my sister and I) were running a bit late but fortunately so was the bus. When we got to the pick-up point the only person I saw was my friend but before long other adventurers showed up. There are several routes to get to Portland from Kingston. We were to travel via the beautiful hills of Stony lol I mean Stony Hills. Stony Hills is a residential area in the parish of St. Andrew. This was supposedly the shortest route to our destination with the journey being approximately 2 hours long.

The bus arrived. As we boarded our names were checked off and within a few minutes, after the final payments were collected, we were on our way. It's a common practice of Jamaicans to pray before beginning any journey, especially for an outing so a member of the Tek-a-Trip Jamaica team, Oraine (quizmaster/tour guide) prayed. We then did our introductions. Once the formalities were out of the way the fun began. The Tek-a-Trip Jamaica team kept us occupied and entertained the whole way to Portland.

We were placed into groups based on how we were seated and then asked to name our group. I was especially happy with this arrangement because myself, my friend and sister were on the same team. We also had to give a reason for the group name choice. Some of the names were hilarious and the reasons behind them were pretty interesting. Oraine put his spin on some of the names and we just had to work with it. We played an exciting game of 'Bus Challenge Quiz'. The quiz featured questions from English, Bible Knowledge, Music and General Knowledge about Jamaica. The game was nothing short of entertaining and believe me when I tell you I laaf til me belly buss (excessive or uncontrollable, but hearty laughter). The best part is, we won! Big up team #JKMN aka team #NoL pronounced 'Noel'. 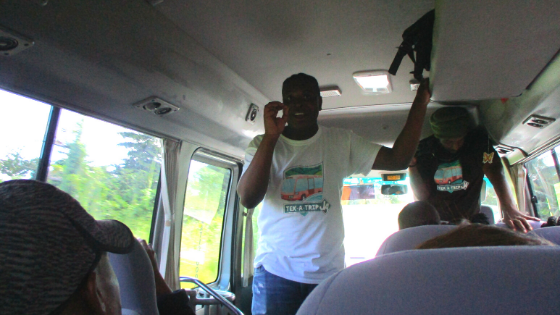 As we got further away from the hustle and bustle of city life, we had a breath of fresh air, the clean air was noticeably different from what we're used to in town. We also noticed the lush vegetation as we ventured into the hills. In a short while, we caught glimpses of the sea, at that moment we knew we were close. We had a brief rest stop and then we were back on the road. Being a Portlander Oraine proudly gave us a brief history of his parish. We got to Buff Bay Portland and got off the bus to take pictures. Once again, our journey continued and this time there was an extremely amusing debate about men, women and relationships. The next stop was for lunch. The bus parked across from KFC and there were cookshops nearby which offered vegetarian options. Oh, a little while before that we were served refreshments on the bus. The lunch break wasn't a long one and before we knew it, we arrived at our first destination. 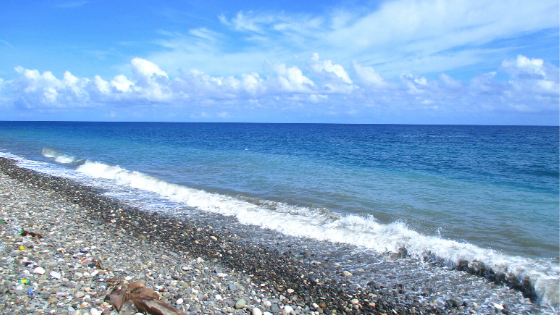 This was my first time at the beautiful Frenchman's Cove and it was love at first sight. The magnificent beach is set in a cove where the river meets the sea. Upon entrance to the grounds, we were greeted by rich foliage and a short walk later we were at the beach. We quickly got changed as we only had an hour and forty-five minutes before heading to our next location. 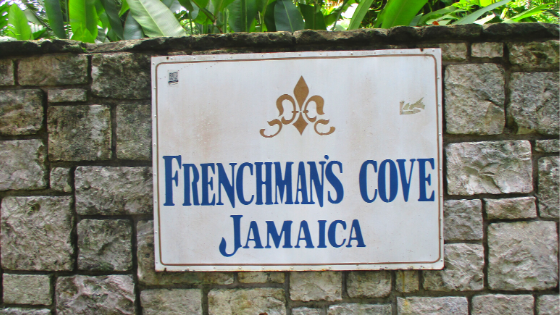 Immediately we headed to the swings. Frenchman's Cove is known for its swings and honestly, you weren't at Frenchman's Cove if you didn't take a picture on at least one of the Instagram famous swings. I believe they have three. The cool river gently made its way to the sea as the current pulled at our legs as if beckoning us to flow with it. After completing our mini photoshoot by the swing we went down to the sea. Many persons opted to relax on the sand, being the water lover that I am, I had to take a dip. The sea was a bit rough due to the recent rains. I certainly got my fair share of knocks from the waves. Time surely flies when you're having fun because in the blink of an eye we were on to the second location. 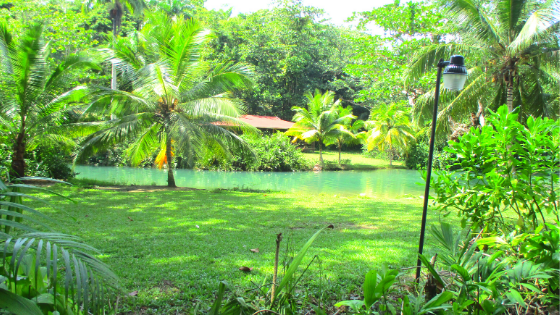 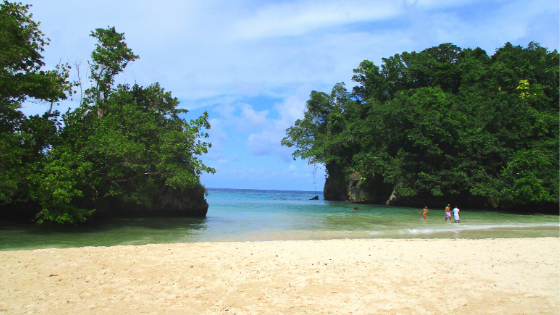 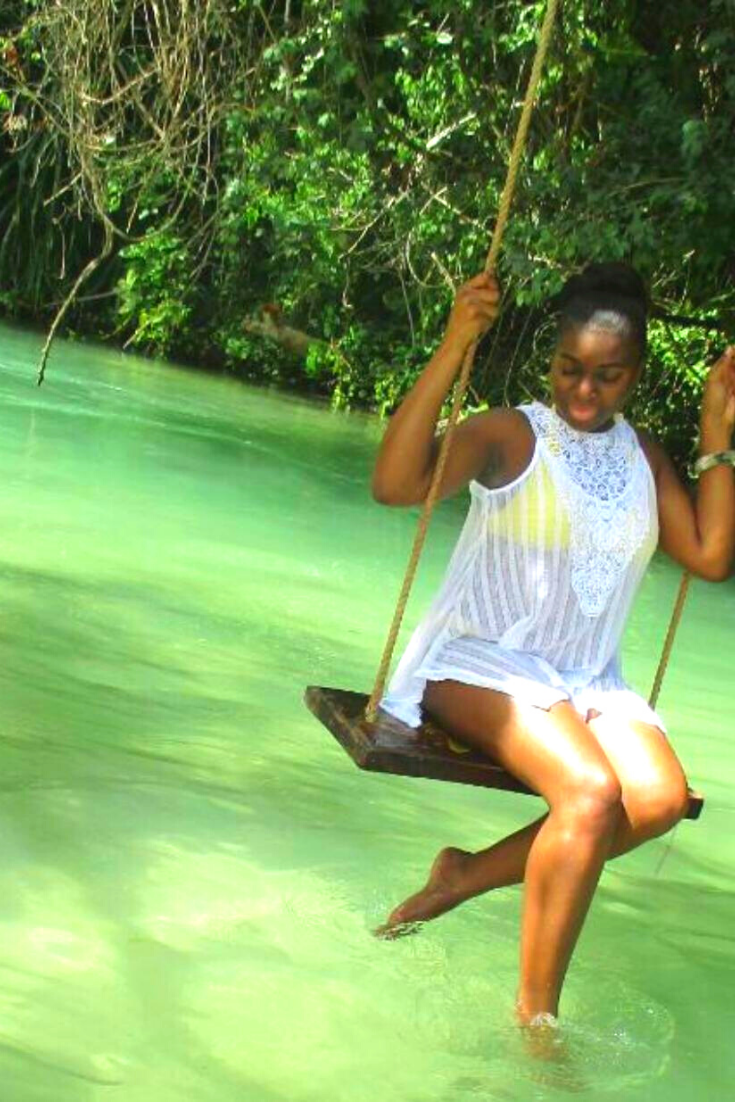 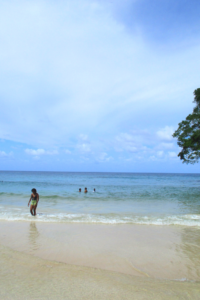 Blue Lagoon as the name suggests is a watering hole with turquoise blue waters, though it appeared more green on the day we went, once again due to rain. It is surrounded by lush greenery. It was about five to ten minutes away from Frenchman's Cove by vehicle, based on my estimation. The deepest part of the lagoon is approximately 200 feet. The alluring lagoon can be toured by boat, kayak or raft. We got a boat tour. Our tour guide spoke about the history of the lagoon and some fun facts including movies in which the lagoon was featured. As part of the tour, we passed some luxurious villas along the shoreline. We then sailed to the final location. 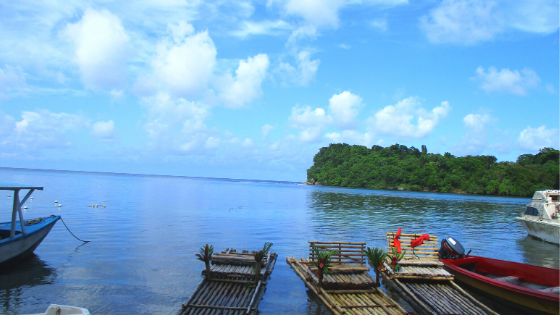 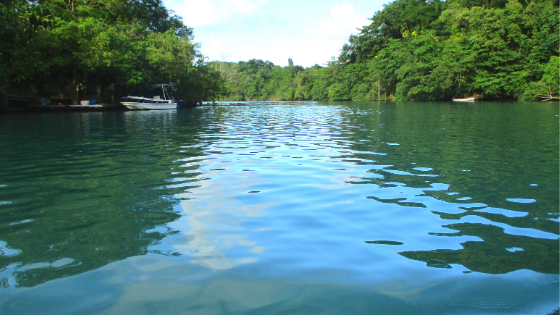 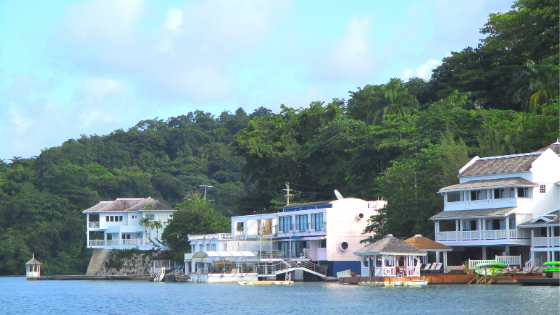 Some of the villas we saw

The boat ride to Monkey Island was paired with the Blue Lagoon tour. The shallow water is perfect for wading or you can choose to relax on the tiny beach. It was also possible to hike up to the top and get an epic view of the sea below. A small group did the hike, I wanted to but got left behind and I wasn't brave enough to go it alone. The time we spent on Monkey Island was really for reflecting. The Tek-a-Trip Jamaica team had us form a circle which they called the "Gratitude Circle". We then went around stating our name, something we were grateful for and something we wanted to release from our lives. After everyone had their turn, we then threw our hands up and yelled "Let it go" or something like that I don't quite remember. This was my favourite part of the trip. 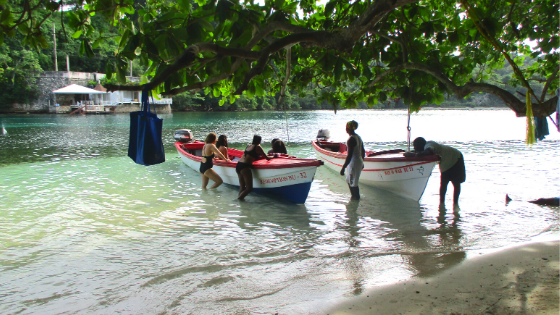 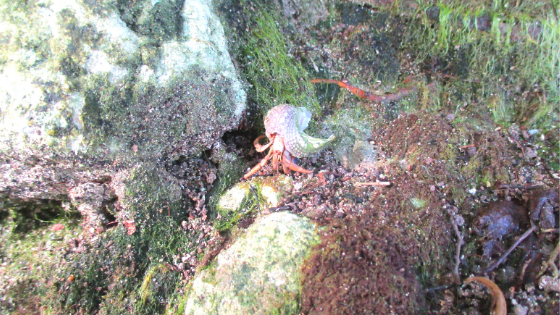 We left Monkey Island shortly after that and went back to Blue Lagoon where we swam around and chatted for a while before heading back to the mainland. Swimming in the peaceful lagoon was the perfect way to end the day. We got changed and boarded the bus to go back to Kingston. The only issue I had was that there wasn't a changing facility at Blue Lagoon. There was a shed which we used but it needs major work. The ride home was quiet as we were all exhausted from an adventurous day. 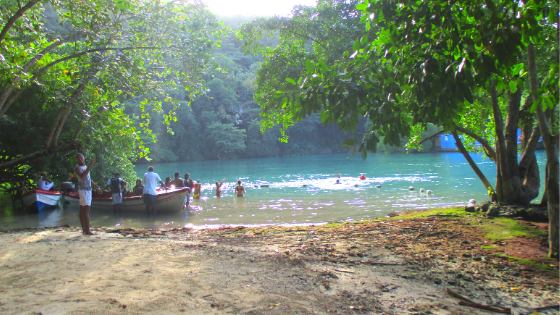 The perfect way to end the day - swimming in the lagoon 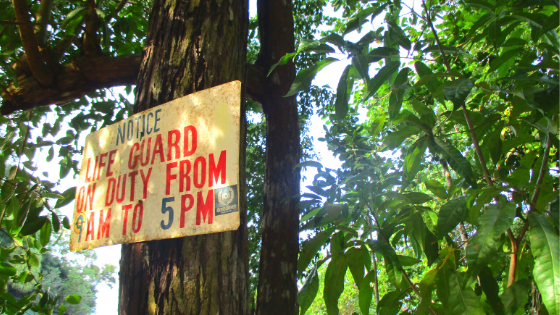 All in all, it was an awesome day. This was my second visit to Portland and I thoroughly enjoyed it. This experience taught me that nature can be enjoyed in its purest form and a group of strangers can bond as a family even for a day. I highly recommend that you tek a trip with Tek-a-Trip Jamaica. The trip was well organized, the day ran smoothly and dem ful a vibes (energetic and fun to be around). You won't regret the experience. Feel free to follow Tek-a-Trip Jamaica on Instagram @ Tek-a-Trip JA or on Facebook at Tek-a-Trip JA.

Have you ever been to Portland? Feel free to share your experience in the comments below. Thanks for reading. 9 Things You Should Do At Margaritaville Ocho Rios